Home » Andrew Hanlon Is On The Hunt To Be The Coyote King with his Pristine 5.0 swapped FoxBody

Andrew Hanlon Is On The Hunt To Be The Coyote King with his Pristine 5.0 swapped FoxBody 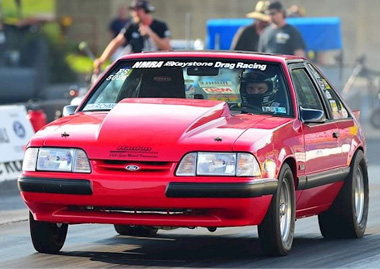 Making the most of the great gift of time he’s been given courtesy of the Coronavirus, NMRA Richmond Gear Factory Stock racer and stick-shift aficionado Andrew Hanlon is on the hunt for quicker time slips thanks to an all-new Coyote powerplant.

Hanlon has campaigned his striking red ’90 Ford Mustang LX in the NMRA since 2018, following in the footsteps of his father, fellow racer, and Hanlon Motorsports expert transmission builder, Bob Hanlon. They both have come a long way in the time since, and the younger Hanlon has enjoyed a little pandemic retail therapy in recent weeks.

Previously running a stock 302ci push rod engine and Tremec TR-3650 transmission in his Hanlon Motorsports-backed Fox body, the Hanlon had a blast getting acclimated in the NMRA Richmond Gear Factory Stock class.

After two years, though, he decided to step things up a bit and a host of changes were in the cards for the little Mustang that could. Going from street car to race car was a big undertaking, but Hanlon was up for the challenge and started the transformation during the real 2019-2020 off season.

“I went in and stripped the entire interior, and swapped the stock seats over to a set of Kirkey ones. I stripped the wiring, put in an actual race steering wheel for once, and finally moved the battery to the back like I shoulda done a long time ago,” laughed Hanlon, who also scrapped the factory fuel tank in favor of a race-ready fuel cell. “I also cut the doors and changed the hood and was able to drop about four-hundred pounds in total.”

Thanks to help from Wilwood Brakes and Race Star Wheels, the Pennsylvania-based racer was also able to do a 5-lug conversion. Framed by a beautiful set of Race Star’s Pro Forge wheels, Wilwood’s drag brakes mate to Strange Engineering axles that feed into a built 8.8-inch rear end with a new Strange spool. Lucky’s Race Cars did all of the requisite rear end work, including bracing it, welding the axle tubs, and the 9-inch ends along with the full assembly.

Things really got exciting, though, when Hanlon picked up a Gen 2 Coyote engine during the “Rona Offseason” and decided to give it a go.

“I’m collecting the rest of the parts that I need and will be starting the swap soon,” shared Hanlon, who never had time before to finish the engines that he wanted to build and instead took advantage of the unexpected downtime. “I’m hoping we can be competitive. The class is in the low-10s now, so I’d like to be around there, too.”

Fellow NMRA racer Vinny Palazzolo is letting Hanlon store his swap at his shop, R&S Automotive, and will likely be helping out with the car throughout the year while Jay Fritz will assist with installation and wiring, as will Hanlon’s father.

In addition to the Coyote powerplant, however, Hanlon ordered up a new G101-A gearbox from G-Force Racing Transmissions that will be shipping out as soon as operations resume from the forced shut-downs, and will give his Ram clutch a good home.

“I’ll be starting with a whole new setup, so it’ll be tough to try and make the rescheduled NMRA race at St. Louis, but if we can’t swing that, then we’ll definitely be ready in time for Bowling Green,” noted Hanlon, who hopes to be able to go testing and get things dialed in prior to heading into competition with his manual gearbox-equipped Hanlon Motorsports Mustang. “And, we’ll run the full Factory Stock season in 2021 and beyond.”

To further shake things up, in addition to the Coyote swap, Hanlon also left his former career at American Muscle to instead focus on helping run the family business, which he’ll take over when his father retires. And, to continue the trend of horsepower-loving Hanlons, his own son, Drew, has already shown quite an interest in being the next Hanlon down the track… in about 14 more years.