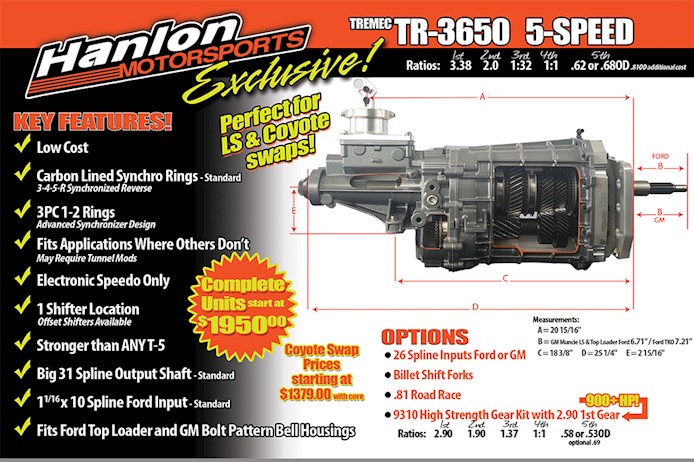 A 1992 science fiction movie, Universal Soldiers, portrayed revived Special Forces members who had been killed in action. These soldiers were used for missions beyond the scope of modern special warfare capabilities. The military was essentially using discarded human bodies and rebuilding them into fighting machines.

You could say that Hanlon Motorsports is accomplishing the same task with discarded and spent Tremec 3650 manual transmissions. Hanlon rebuilds them to be better and stronger, and ensures each one is ready for a high-performance afterlife. The Hanlon version is also modified for a universal fit behind an assortment of engine configurations.

A new billet Hanlon Motorsports adapter ring/cover plate allows the transmission to be bolted behind any Modular engine, 5.0L, 5.8L, or big-block. Hanlon has enabled the popular Tremec 3650 to be a legitimate option in a world so often dominated by Tremec’s other products–like its five-speed heavy-duty transmissions, TKO-500 and TKO-600, and its six-speed transmissions, such as the T56 and TR6060 units.

Bob Hanlon, proprietor, retools worn-out components, and replaces weak ones with stronger parts. The transmission photographed for this story is going behind a 700-rwhp supercharged Two-Valve Modular engine. Hanlon doesn’t want to put an exact hp number on the power limits, but he said the intended use for this transmission is now a lot wider than ever before.

“You have to consider a car’s weight, power, traction/tire size, and even driving style. A modified 3650 can fit a lot of different combinations and is an affordable alternative to other products,” says the Pennsylvania-based Tremec specialist.

The Tremec 3650 is the transmission that replaced the T45 for the 4.6L-powered Mustang. The change happened sometime in the middle of 2001 and ran through to 2004. All GT models through those years came equipped with this transmission, as well as the ’01 SVT Cobra and ’03-’04 Mach 1s. In 2005, the 3650 was slightly redesigned to adapt to the new chassis–more on that in a bit. The 3650 remained in the trans tunnel through the ’10 model year until the Getrag six-speed replaced it in ’11.

Hanlon Motorsports keeps several cores in stock, but if you are hunting one down, beware–as mentioned above, there are a few different versions. All Tremec 3650 gearboxes come equipped with a 3.38:1 First gear, 2.00:1 Second gear, 1.32:1 Third gear, and 1.00:1 Fourth gear. Overdrive is different with the ’01-early ’02 models, carrying a 0.62:1 Fifth/Overdrive, which was upped to 0.68:1 for the rest of the units. Each style 3650 uses an electronic speedometer.

As for the differences between the New-Edge 3650 and the S197 version, the case and mainshafts are not interchangeable, although both transmissions will bolt up to any 4.6L engine. The ’01-’04 3650 utilizes a tail-mount shifter, traditional slip-yoke, and a cable-style throwout bearing. The S197 version has a remote-mounted shifter, flange-style yoke, and a hydraulic-assisted throwout bearing.

The 3650 has a lot of negatives in the aftermarket high-performance market. The first is different case assembly, as compared to the other Tremec products. The bellhousing acts as a front cover, as opposed to the previous transmissions that have a top cover to reveal the inside guts. You can’t simply remove a few bolts and access the internals of a 3650. And before the Hanlon billet adapter, it was impossible to add an SFI-certified bellhousing to the 3650. Hanlon explains, “I didn’t like the 3650 at first, but that changed once I figured out all the little things and made special tools to help the workflow.” A basic Stage 1 rebuild goes for approximately $1,500 and he adds new shift forks and replaces the normal wearable items. The optional Hanlon billet adapter plate is sold separately.

The Stage 2 version–his most popular upgrade–comes in around $2,000, without a shifter. Hanlon didn’t want to put an exact number on Stage 2 because there are different options. The Stage 2 3650 gets the ultra strong 26-spline input shaft and the billet adaptor plate. Stage 2 is popular because it addresses a lot of the durability issues in high- performance applications, thanks to the larger input shaft.

Stage 3 gets you a set up that will hold up to 1,000 hp or more. It checks in at $3,800, and features a G-Force Racing Transmission gearset. Hanlon says the gears are the beefiest and strongest setup you can get for a street-style transmission. He doesn’t add a Pro-shift synchronizer to Stage 3, making it street-worthy even for the hardcore crowd. None of these prices include a bellhousing, but SFI and non-SFI ones are available from Hanlon Motorsports. The prices do include a core, so if you are supplying your own transmission, it gets a little cheaper.

There’s one bump in the road, however, and it’s the electronic speedometer. Hanlon suggests the Abbott Cable X. “It’s a box that takes the electric signal and converts it to command an electric motor that drives a mechanical speedometer cable. I haven’t used one personally, but several customers of mine have used them with success,” said Hanlon. An enthusiast would also have to build a crossmember and get a custom driveshaft, but Hanlon is working on a Fox-body swap kit that should be ready later this year.